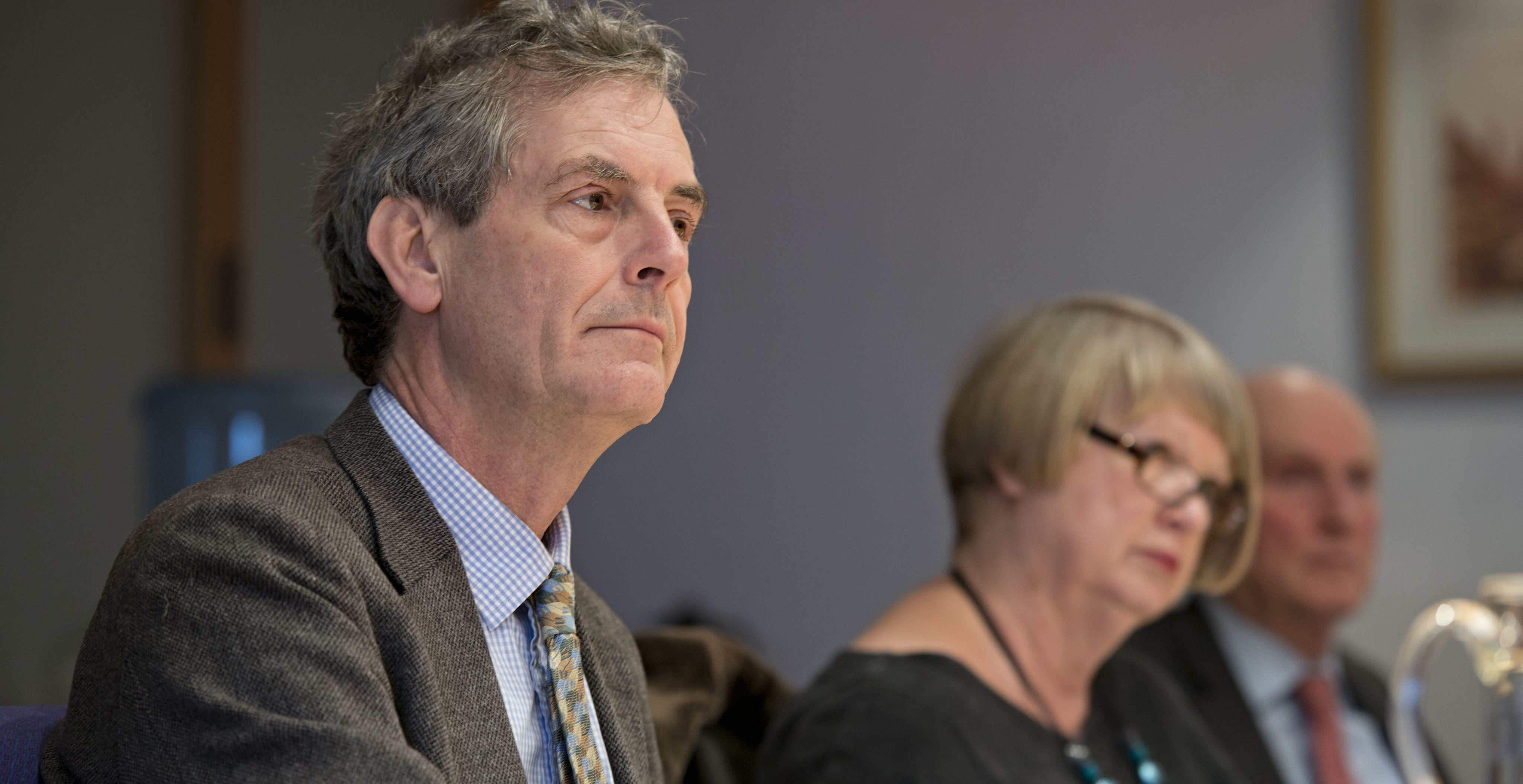 Sir Mark Jones FRSE, owner of Golden Hare Books, was Curator of Medals at the British Museum [1974-1992], Director of the National Museums of Scotland [1992-2001], Director of the V&A [2001-11] and Master of St Cross College, Oxford [2011-2016]. He has written on the history of the medal, fakes and forgeries, collecting and museums, and restitution. He is Chair of the National Trust for Scotland, Hospitalfield and and the Grimsthorpe and Drummond Trust, a visitor of the Ashmolean Museum and a trustee of the Artists Rooms Foundation and the Sarikhani Art Foundation.

Caroline Butler is Director and CIO of Walcot Partners Ltd, an FCA authorised investment adviser to family partnerships and university endowments. During her career in banking based in London and New York, Caroline was Head of UK Private Wealth Management at Deutsche Bank and the first woman elected to the Board of S.G.Warburg in 1984. Currently she is an Associate Fellow of Green Templeton College, Oxford and member of their Investment Committee, the Senior Independent Member of the Nobel Sustainabilty Fund’s Investment Committee, an Advisory Board member of the Official Monetary and Financial Institutions’ Forum, and a member of the Investment Committee of Lady Margaret Hall, Oxford.

David Barrie served in the Diplomatic Service and the Cabinet Office. He then moved into the arts, first as Director of The Japan Festival 1991 and then Director of the Art Fund. He has been a trustee of Butterfly Conservation, the Ruskin Foundation and the Museums, Libraries and Archives Council. He chaired Make Justice Work and has advised Chatham House on drug policy reform. An experienced sailor, he is the author of ‘Sextant, A Voyage Guided by the Stars and the Men Who Mapped the World’s Oceans’ and ‘Incredible Journeys: Exploring the Wonders of Animal Navigation’.  He is a Fellow of the Royal Institute of Navigation.

Joan Winterkorn is an independent advisor on archives and manuscripts. She worked as an archivist in London and a rare book librarian in America before joining the booksellers Bernard Quaritch Ltd in 1979. There she handled the valuation and sale of a large number of literary, political, scientific, theatrical and historical archives. Currently a member of the Acceptance in Lieu Panel and the National Documents Working Party, she has served on the Council of the Friends of the National Libraries, the Friends of Cambridge University Library, and the Editorial Board of The Book Collector. She is a Fellow of the Society of Antiquaries and in 2006 was awarded the Royal Society of Literature’s Benson Medal.

Atul has worked in housing, regeneration, and the public sector.  He has held posts as Regional Director East Midlands, Director of Regulation at The Housing Corporation, Deputy Director at the Cabinet Office Social Exclusion Unit and then Chief Executive roles at ASRA Greater London Housing Association and LHA-ASRA Group in Leicester, until retiring in 2010. Latterly, he was a Trustee of the Heritage Lottery Fund where his roles included Chair of the Finance Committee and Investment Panel. Currently he is Chairman of the Charnwood Forest Landscape Partnership, Member of the Leicester Cathedral Revealed Project Board, Non-Executive Director of the Chesterfield Royal Hospital NHS Foundation Trust and is a trustee of the Royal College of Nursing Foundation, The Dhrupad Music Society and The Sitar Music Society. He is a Fellow of the Chartered Institute of Housing and Fellow of the Royal Society of Arts.

Marie Staunton has worked in social welfare, human rights, international development and the private sector. She started her career running hostels for addicts, alcoholics and homeless young people and families in England, Belfast, Cork and Dublin. After qualifying as a solicitor, she worked with Mirpuri homeworkers in Birmingham and as a human rights and children’s lawyer. She became legal officer of Liberty, concentrating on privacy, prisons and criminal law. She moved onto become Director of Amnesty UK eventually becoming Vice Chair of its International Executive Committee. After seven years in the commercial sector as a Director of a Pearson company she worked for UNICEF, was CEO of Plan UK and Plan Canada. She now chairs SOAS University, Crown Agents and Action Aid as well as being active in her local community.

Dr Alexander Sturgis is the Director of the Ashmolean Museum in Oxford. He was previously the Director of the Holburne Museum, Bath from 2005 to 2014. Before that, Dr Sturgis worked at the National Gallery, London, for 15 years, in various posts including Exhibitions and Programmes Curator from 1999–2005.  He is also an alumnus of University College, Oxford and the Courtauld Institute of Art, London.

Alice has spent over 20 years as an investment manager, the last 15 at Morgan Stanley. She has held a range of roles from portfolio management to research, and built a sustained track record of strong investment performance. Alice left Morgan Stanley in the summer of 2020, both to relocate her family back from New York to London, and to expand her horizons beyond the financial sector whilst bringing her experience to broader use. Acting as a pro-bono consultant to leaders within small charities and social enterprises via the Pilotlight network, has propelled Alice to contribute as a trustee and advisor going forward. Specifically, she has a strong commitment towards access to education/opportunity for all, fighting for equality for women and the visual arts. Recently, she has become a school governor, a trustee for charity Water Harvest and involved in impact investing funds.

Cullagh Warnock started her working life in voluntary sector youth work before going on to work with a number of local and national grant-makers. Currently the Trust Manager for Millfield House Foundation and the external member for the Legal Education Foundation’s Grants, Programmes and Learning committee, she also works in a freelance capacity with several local and national funders. Through her time managing Northern Rock Foundation’s Safety and Justice programme, she developed particular expertise around women’s issues and the women and girls sector. A senior grant-maker, Cullagh has particular experience in relational grant-making, partnership working with other funders, commissioning and using research in grant-making and funding policy work. She has lived in Newcastle upon Tyne for over 35 years. Her most rewarding role is as co-chair of a local domestic abuse service.

Matthew is Chief Executive of Windmill Hill Asset Management (WHAM) and also acts as its Chief Investment Officer. WHAM is the investment manager of three charitable foundations endowed by the Rothschild family. WHAM has a team of approximately 20 investment and operations professionals. Previously Matthew was CIO of Consulta Limited, an investment firm investing in conventional and alternative asset classes on behalf of family offices, small pension funds, private banks and fund products. He is a non-executive director of ART19, a digital media company which he co-founded. He is the author of How to Invest in Hedge Funds, An Investment Professional’s Guide.

Asif Afridi is Deputy CEO at brap, a UK-based equality and human rights charity. He is a trustee and former Chair of Equally Ours, trustee of Baring Foundation and Lankelly Chase Foundation and was a panel member of the Independent Inquiry into the future of Civil Society (2016-18). Asif has published widely on topics of poverty, racism and social cohesion and previously worked in the field of international human rights protection. He has a PhD in social policy. Asif lives in Birmingham.